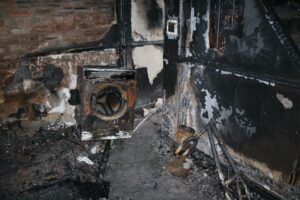 The UK government is said to be stepping in to aid the recall of half a million Whirlpool tumble dryers after 750 house fires were ’caused’ by a massive five million faulty machines.

At Imperial Claims Consultants, we see so many house fires caused by accidents and carelessness, for example chip pan fires or appliances left on overnight, which could have been prevented if people were educated properly on fire safety.

But when a fire is caused by a faulty appliance, there’s often nothing we, as homeowners, can do to prevent it.

The Daily Mail reported: “It emerged earlier this year that more than five million machines had a design fault that has caused at least 750 household fires since 2004, many driving families out of their homes.

“Victims included Jenny Spurr, who was forced to flee her home with her young children in Hampshire after her tumble dryer caught fire.“

This was reported in the Daily Mail on 11 June 2019. Read the full article here and, if your property has been affected by fire, contact Imperial Claims Consultants – we can manage your insurance claim for you and make sure you get every penny you deserve.

Photo for illustration only, taken from one of our own insurance claim records.

This website uses cookies to improve your experience while you navigate through the website. Out of these, the cookies that are categorized as necessary are stored on your browser as they are essential for the working of basic functionalities of the website. We also use third-party cookies that help us analyze and understand how you use this website. These cookies will be stored in your browser only with your consent. You also have the option to opt-out of these cookies. But opting out of some of these cookies may affect your browsing experience.
Necessary Always Enabled
Necessary cookies are absolutely essential for the website to function properly. These cookies ensure basic functionalities and security features of the website, anonymously.
Functional
Functional cookies help to perform certain functionalities like sharing the content of the website on social media platforms, collect feedbacks, and other third-party features.
Performance
Performance cookies are used to understand and analyze the key performance indexes of the website which helps in delivering a better user experience for the visitors.
Analytics
Analytical cookies are used to understand how visitors interact with the website. These cookies help provide information on metrics the number of visitors, bounce rate, traffic source, etc.
Advertisement
Advertisement cookies are used to provide visitors with relevant ads and marketing campaigns. These cookies track visitors across websites and collect information to provide customized ads.
Others
Other uncategorized cookies are those that are being analyzed and have not been classified into a category as yet.
SAVE & ACCEPT